Thanks for everything Albert 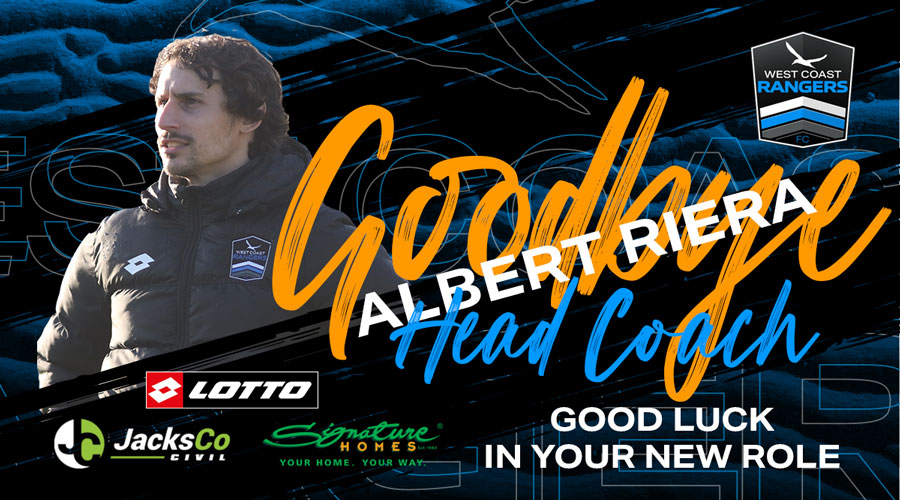 After a transformational first season with the club, it is with great regret that West Coast Rangers (WCR), announce the resignation of Albert Riera as men’s head coach, with immediate effect.

After an offer that came ‘out of the blue’, Albert has accepted a coaching role at a well-known overseas club.

“I had a vision and a plan of what the next 2 years looked like at WCR. I was committed and I was excited about building this club and improving our players and performances. It was a good challenge for us……I’m going to miss this.”

In his short time at WCR, Albert had demonstrated many times that he bought into our mission and was committed to the project – but ultimately the pull of a contract at a major club in a top league was too much of an opportunity to turn down.

“The WCR board have been very supportive. Great people. I know the infrastructure has been set up, it is in place…..I’m confident the next head coach has the framework and the player base to build on and can be successful in steering the club back to the Northern League” said Riera.

"I’m extremely grateful for the opportunity that Mike, Lloyd, Andy and the whole club gave me, my first head coaching role, and I will always be a fan and follow the results of this club.”

Albert has been an inspirational leader, taking over a team at a really difficult time, creating belief and installing a positive team culture that brought out the best of our players and gave us a chance at survival. His coaching and man management qualities have been apparent to all of us at WCR, and his new club are very lucky to have him.

"We wish Albert and Alicia all the best for the future. Albert knows there is always a home at Fred Taylor Park for him" said chair Mike Brooke. "We will continue to build on the foundations he helped to lay out for the men’s program as we look ahead to the 2022 season."

Thanks for everything Albert and good luck.