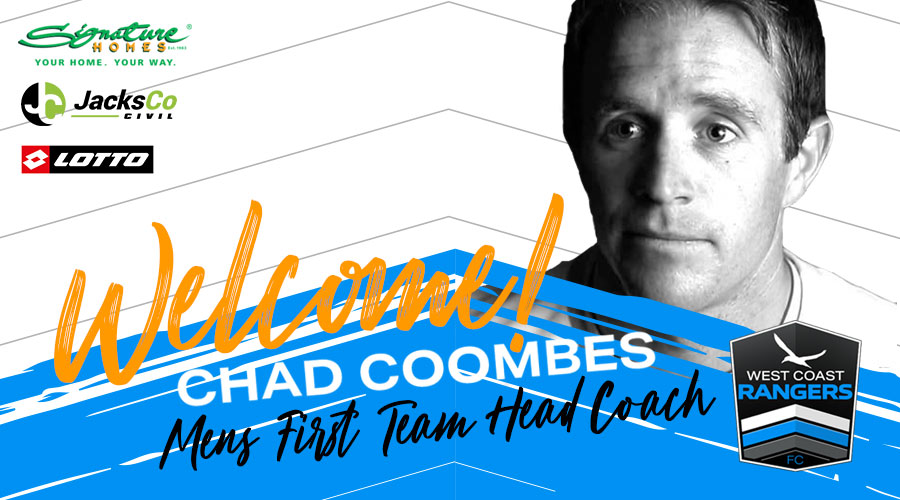 West Coast Rangers (WCR) are pleased to announce that Chad Coombes has signed a 3 year deal to join the club as men’s 1st team head coach. Chad will take charge of the men’s first team and work closely alongside the U23 U19 and U17 coaches.

West Coast Rangers Director of Football Andy Dunn said “I’m delighted that Chad has chosen to join the club as 1st team head coach , and I’m confident he can build on and improve the foundations laid down by Albert Riera and Angel Berlanga last season".

Chad has huge experience as both a top-level player and coach. He comments “I share the clubs ambition to make West Coast Rangers a center of excellence for both Elite and Community players out West, and look forward to the challenge of the head coaching role”.

Chad had a senior playing career which included representing the All Whites, stints in England, being part of the Kingz in the early days of professional football in Aotearoa, 3 club world cups, multiple National titles and 150+ games with Auckland City before he headed west to Waitakere United.

Outside of coaching duties Chad is a dedicated teacher. He started out at Rutherford College, and is currently the Director of Sport at Onehunga High School.

“The club has a 3-year strategic plan and we are approaching the 2022 season as a 22 game sabbatical in Division 1. We are determined to return to the Northern League in 2023 better prepared and highly competitive” said Lloyd Jones, Director of WCR.

"Appointing Chad, a young and promising coach with a successful record as an assistant with Birkenhead fit’s our philosophy of developing homegrown players out west, giving them a pathway to the first team.

As we continue to build on the momentum laid by Albert Riera and Angel Berlanga in the latter part of 2021, Chad will be a great fit who will relish the opportunity to lead a talented group that we believe can compete and be successful at Lotto NRFL level”.

Pre season training and games start in January with the first competitive fixtures in NRFL Division 1 commencing in March 2022.